From the Late Greek name Χριστόφορος (Christophoros) meaning "bearing CHRIST", derived from Χριστός (Christos) combined with φέρω (phero) meaning "to bear, to carry". Early Christians used it as a metaphorical name, expressing that they carried Christ in their hearts. In the Middle Ages, literal interpretations of the name's etymology led to legends about a Saint Christopher who carried the young Jesus across a river. He has come to be regarded as the patron saint of travellers.As an English given name, Christopher has been in general use since the 15th century. It became very popular in the second half of the 20th century, reaching the top of the charts for England and Wales in the 1980s, and nearing it in the United States.In Denmark this name was borne by three kings (their names are usually spelled Christoffer), including the 15th-century Christopher of Bavaria who also ruled Norway and Sweden. Other famous bearers include Italian explorer Christopher Columbus (1451-1506), English playwright Christopher Marlowe (1564-1593), English architect Christopher Wren (1632-1723) and the fictional character Christopher Robin from A. A. Milne's Winnie-the-Pooh books. 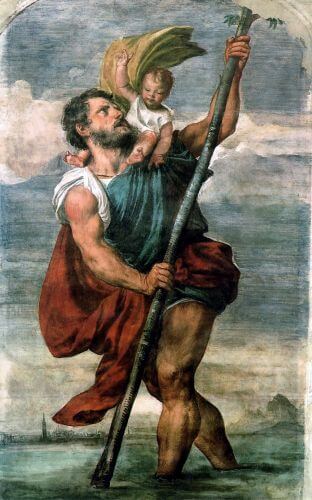 Depiction of Saint Christopher by Titian