English form of the Roman family name Antonius, which is of unknown Etruscan origin. The most notable member of the Roman family was the general Marcus Antonius (called Mark Antony in English), who for a period in the 1st century BC ruled the Roman Empire jointly with Augustus. When their relationship turned sour, he and his mistress Cleopatra were attacked and forced to commit suicide, as related in Shakespeare's tragedy Antony and Cleopatra (1606).The name became regularly used in the Christian world due to the fame of Saint Anthony the Great, a 4th-century Egyptian hermit who founded Christian monasticism. Its popularity was reinforced in the Middle Ages by the 13th-century Saint Anthony of Padua, the patron saint of Portugal. It has been commonly (but incorrectly) associated with Greek ἄνθος (anthos) meaning "flower", which resulted in the addition of the h to this spelling in the 17th century. 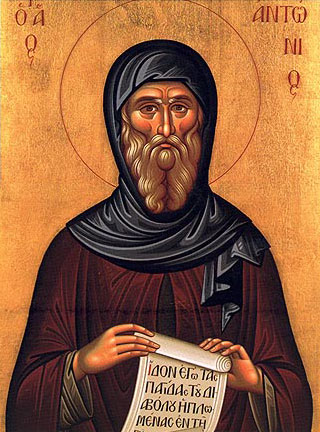