Means "rich guard", derived from the Old English elements ead "wealth, fortune" and weard "guard". This was the name of several Anglo-Saxon kings, the last being Saint Edward the Confessor shortly before the Norman Conquest in the 11th century. He was known as a just ruler, and because of his popularity his name remained in use after the conquest when most other Old English names were replaced by Norman ones. The 13th-century Plantagenet king Henry III named his son and successor after the saint, and seven subsequent kings of England were also named Edward.This is one of the few Old English names to be used throughout Europe (in various spellings). A famous bearer was the British composer Edward Elgar (1857-1934). It was also used by author Charlotte Brontë for the character Edward Rochester, the main love interest of the title character in her novel Jane Eyre (1847). 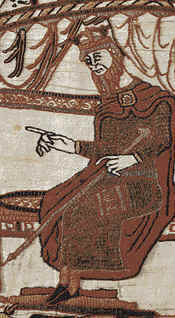 Edward the Confessor as shown on the Bayeaux Tapestry