From the Greek name Αἰκατερίνη (Aikaterine). The etymology is debated: it could derive from an earlier Greek name Ἑκατερινη (Hekaterine), itself from ἑκάτερος (hekateros) meaning "each of the two"; it could derive from the name of the goddess Hecate; it could be related to Greek αἰκία (aikia) meaning "torture"; or it could be from a Coptic name meaning "my consecration of your name". In the early Christian era it became associated with Greek καθαρός (katharos) meaning "pure", and the Latin spelling was changed from Katerina to Katharina to reflect this.The name was borne by a semi-legendary 4th-century saint and martyr from Alexandria who was tortured on a spiked wheel. The saint was initially venerated in Syria, and returning crusaders introduced the name to Western Europe. It has been common in England since the 12th century in many different spellings, with Katherine and Catherine becoming standard in the later Middle Ages. To this day both spellings are regularly used in the English-speaking world. In the United States the spelling Katherine has been more popular since 1973.Famous bearers of the name include Catherine of Siena, a 14th-century mystic, and Catherine de' Medici, a 16th-century French queen. It was also borne by three of Henry VIII's wives, including Katherine of Aragon, and by two empresses of Russia, including Catherine the Great. 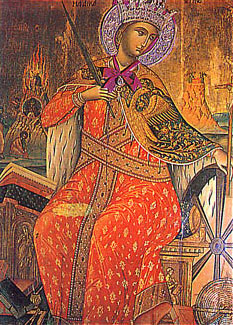 Depiction of Saint Katherine of Alexandria