Means "praised, commendable" in Arabic, derived from the root حَمِدَ (hamida) meaning "to praise". This was the name of the prophet who founded the Islamic religion in the 7th century. According to Islamic belief, at age 40 Muhammad was visited by the angel Gabriel, who provided him with the first verses of the Quran. Approximately 20 years later he conquered Mecca, the city of his birth, and his followers controlled most of the Arabian Peninsula at the time of his death in 632.Since the prophet's time his name has been very popular in the Muslim world. It was borne by several Abbasid caliphs and six sultans of the Ottoman Empire (though their names are usually given in the Turkish spelling Mehmet). It was also borne by Muhammad ibn Musa al-Khwarizmi, a 9th-century Persian mathematician and scientist who devised algebra. Other famous bearers include the founder of Pakistan Muhammad Ali Jinnah (1876-1948) and the American boxer Muhammad Ali (1942-2016). 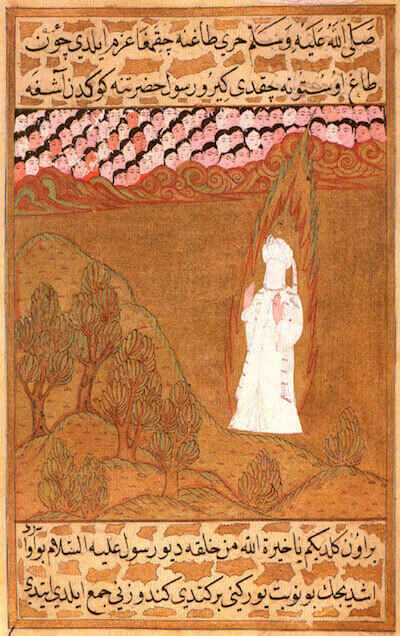 Ottoman miniature of the Prophet Muhammad (with veiled face)