From the Spanish and Portuguese name Teresa. It was first recorded as Therasia, being borne by the Spanish wife of Saint Paulinus of Nola in the 4th century. The meaning is uncertain, but it could be derived from Greek θέρος (theros) meaning "summer", from Greek θερίζω (therizo) meaning "to harvest", or from the name of the Greek island of Therasia (the western island of Santorini).The name was mainly confined to Spain and Portugal during the Middle Ages. After the 16th century it was spread to other parts of the Christian world, due to the fame of the Spanish nun and reformer Saint Teresa of Ávila. Another famous bearer was the Austrian Habsburg queen Maria Theresa (1717-1780), who inherited the domains of her father, the Holy Roman emperor Charles VI, beginning the War of the Austrian Succession. 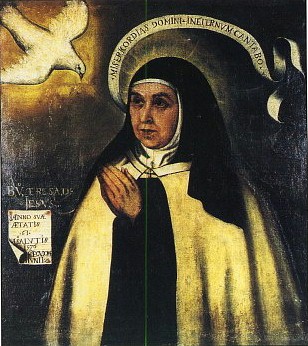 Depiction of Saint Teresa of Ávila