From the Greek name Γεώργιος (Georgios), which was derived from the Greek word γεωργός (georgos) meaning "farmer, earthworker", itself derived from the elements γῆ (ge) meaning "earth" and ἔργον (ergon) meaning "work". Saint George was a 3rd-century Roman soldier from Palestine who was martyred during the persecutions of Emperor Diocletian. Later legends describe his defeat of a dragon, with which he was often depicted in medieval art.Initially Saint George was primarily revered by Eastern Christians, but returning crusaders brought stories of him to Western Europe and he became the patron of England, Portugal, Catalonia and Aragon. The name was rarely used in England until the German-born George I came to the British throne in the 18th century. Five subsequent British kings have borne the name.Other famous bearers include two kings of Greece, the composer George Frideric Handel (1685-1759), the first president of the United States, George Washington (1732-1797), and the Pacific explorer George Vancouver (1757-1798). This was also the pen name of authors George Eliot (1819-1880) and George Orwell (1903-1950), real names Mary Anne Evans and Eric Arthur Blair respectively. 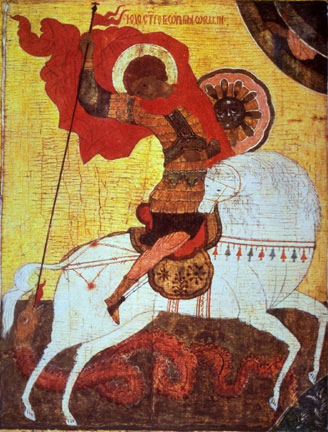