Derived from Jackin (earlier Jankin), a medieval diminutive of John [1]. There could be some early influence from the unrelated French name Jacques [2]. It is often regarded as an independent name. During the Middle Ages it was very common, and it became a slang word meaning "man". It was frequently used in fairy tales and nursery rhymes, such as Jack and the Beanstalk, Little Jack Horner, and Jack Sprat.American writers Jack London (1876-1916) and Jack Kerouac (1922-1969) were two famous bearers of this name. It is also borne by the actor Jack Nicholson (1937-) and the golfer Jack Nicklaus (1940-). Apart from Nicklaus, none of these famous bearers were given the name Jack at birth.In the United Kingdom this form has been bestowed more frequently than John since the 1990s, being the most popular name for boys from 1996 to 2008. 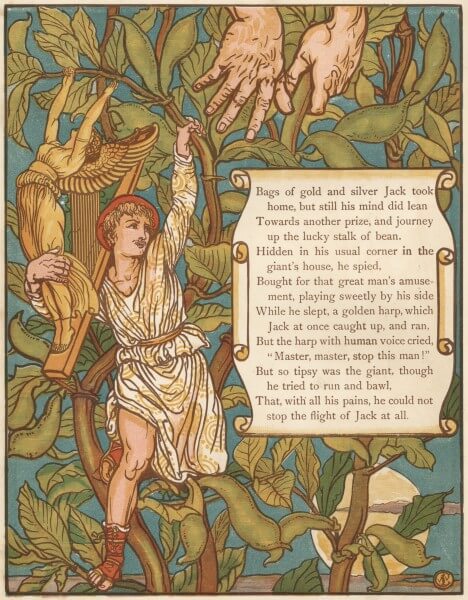 Depiction of Jack and the Bean Stalk by Walter Crane (1875)