Medieval English form of Johanne, an Old French form of Iohanna (see JOANNA). This was the usual English feminine form of John in the Middle Ages, but it was surpassed in popularity by Jane in the 17th century. It again became quite popular in the first half of the 20th century, entering the top ten names for both the United States and the United Kingdom, though it has since faded.This name (in various spellings) has been common among European royalty, being borne by ruling queens of Naples, Navarre and Castile. Another famous bearer was Joan of Arc, a patron saint of France (where she is known as Jeanne d'Arc). She was a 15th-century peasant girl who, after claiming she heard messages from God, was given leadership of the French army. She defeated the English in the battle of Orléans but was eventually captured and burned at the stake.Other notable bearers include the actress Joan Crawford (1904-1977) and the comedian Joan Rivers (1933-2014), both Americans. 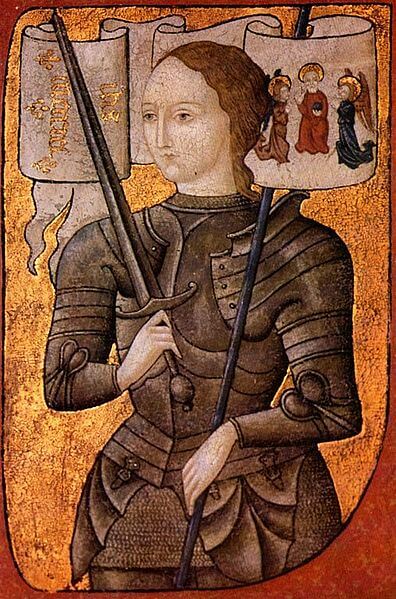 Depiction of Joan of Arc by Martin Lefranc (1450)