From Ioseph, the Latin form of Greek Ἰωσήφ (Ioseph), which was from the Hebrew name יוֹסֵף (Yosef) meaning "he will add", from the root יָסַף (yasaf). In the Old Testament Joseph is the eleventh son of Jacob and the first with his wife Rachel. Because he was the favourite of his father, his older brothers sent him to Egypt and told their father that he had died. In Egypt, Joseph became an advisor to the pharaoh, and was eventually reconciled with his brothers when they came to Egypt during a famine. This name also occurs in the New Testament, belonging to Saint Joseph the husband of Mary, and to Joseph of Arimathea.In the Middle Ages, Joseph was a common Jewish name, being less frequent among Christians. In the late Middle Ages Saint Joseph became more highly revered, and the name became popular in Spain and Italy. In England it became common after the Protestant Reformation. In the United States it has stayed within the top 25 names for boys since 1880, making it one of the most enduringly popular names of this era.This name was borne by rulers of the Holy Roman Empire and Portugal. Other notable bearers include the founder of Mormonism Joseph Smith (1805-1844), Polish-British author Joseph Conrad (1857-1924) and the Soviet dictator Joseph Stalin (1878-1953). 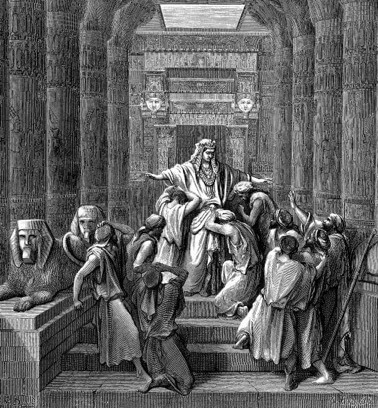 Joseph Makes Himself Known to His Brothers, by Gustave Doré (1866)