From the Hebrew name רָחֵל (Rachel) meaning "ewe". In the Old Testament this is the name of the favourite wife of Jacob. Jacob was tricked by her father Laban into marrying her older sister Leah first, though in exchange for seven years of work Laban allowed Jacob to marry Rachel too. Initially barren and facing her husband's anger, she offered her handmaid Bilhah to Jacob to bear him children. Eventually she was herself able to conceive, becoming the mother of Joseph and Benjamin.The name was common among Jews in the Middle Ages, but it was not generally used as a Christian name in the English-speaking world until after the Protestant Reformation. A notable bearer was the American conservationist Rachel Carson (1907-1964). 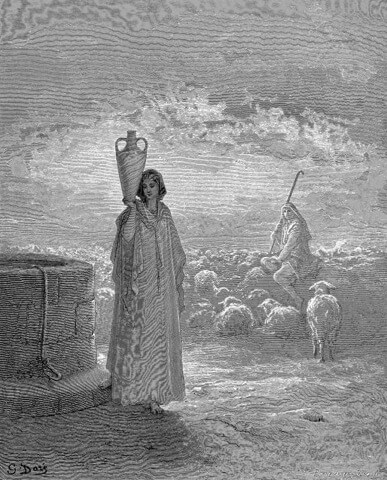 Rachel being watched Jacob in an image by Gustave Doré (1866)