Means "brave ruler", derived from the Germanic elements ric "ruler, mighty" and hard "brave, hardy". The Normans introduced this name to Britain, and it has been very common there since that time. It was borne by three kings of England including Richard I the Lionheart, one of the leaders of the Third Crusade in the 12th century.During the late Middle Ages this name was typically among the five most common for males (with John, William, Robert and Thomas). It remained fairly popular through to the modern era, peaking in the United States in the 1940s and in the United Kingom a bit later, and steadily declining since that time.Famous bearers include two German opera composers, Richard Wagner (1813-1883) and Richard Strauss (1864-1949), as well as British explorer Sir Richard Burton (1821-1890), American physicist Richard Feynman (1918-1988), British actor Richard Burton (1925-1984) and American musician Little Richard (1932-). 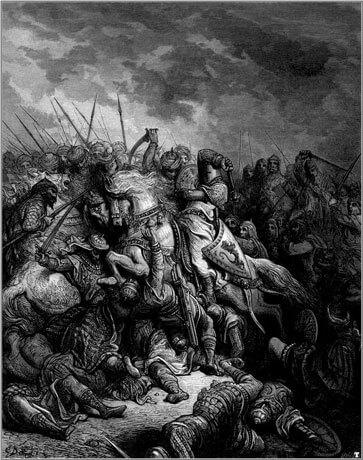 Richard I of England at the Battle of Arsuf, by Gustave Doré (1875)