From the Hebrew name שִׁמְשׁוֹן (Shimshon), derived from שֶׁמֶשׁ (shemesh) meaning "sun". Samson was an Old Testament hero granted exceptional strength by God. His mistress Delilah betrayed him and cut his hair, stripping him of his power. Thus he was captured by the Philistines, blinded, and brought to their temple. However, in a final act of strength, he pulled down the pillars of the temple upon himself and his captors.This name was known among the Normans due to the Welsh bishop Saint Samson, who founded monasteries in Brittany and Normandy in the 6th century. In his case, the name may have been a translation of his true Celtic name. As an English name, Samson was common during the Middle Ages, having been introduced by the Normans. 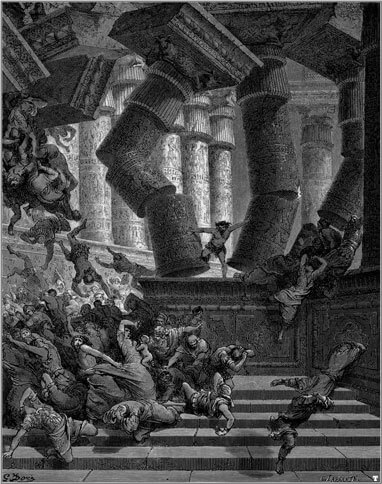