English form of a Germanic name meaning "peaceful ruler", derived from frid "peace" and ric "ruler, mighty". This name has long been common in continental Germanic-speaking regions, being borne by rulers of the Holy Roman Empire, Germany, Austria, Scandinavia, and Prussia. Notables among these rulers include the 12th-century Holy Roman emperor and crusader Frederick I Barbarossa, the 13th-century emperor and patron of the arts Frederick II, and the 18th-century Frederick II of Prussia, known as Frederick the Great.The Normans brought the name to England in the 11th century but it quickly died out. It was reintroduced by the German House of Hanover when they inherited the British throne in the 18th century. A famous bearer was Frederick Douglass (1818-1895), an American ex-slave who became a leading advocate of abolition. 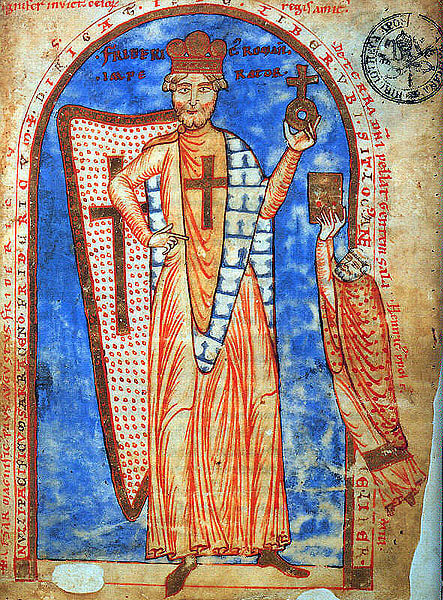 Frederick I Barbarossa from a manuscript (1188)