English form of Ματθαῖος (Matthaios), which was a Greek form of the Hebrew name מַתִּתְיָהוּ (Mattityahu) meaning "gift of Yahweh", from the roots מַתָּן (mattan) meaning "gift" and יָה (yah) referring to the Hebrew God. Matthew, also called Levi, was one of the twelve apostles. He was a tax collector, and supposedly the author of the first gospel in the New Testament. He is considered a saint in many Christian traditions. The variant Matthias also occurs in the New Testament belonging to a separate apostle. The name appears in the Old Testament as Mattithiah.As an English name, Matthew has been in use since the Middle Ages. A notable bearer was the American naval officer Matthew C. Perry (1794-1858), who led a delegation to Japan. A famous modern bearer is American actor Matthew McConaughey (1969-). 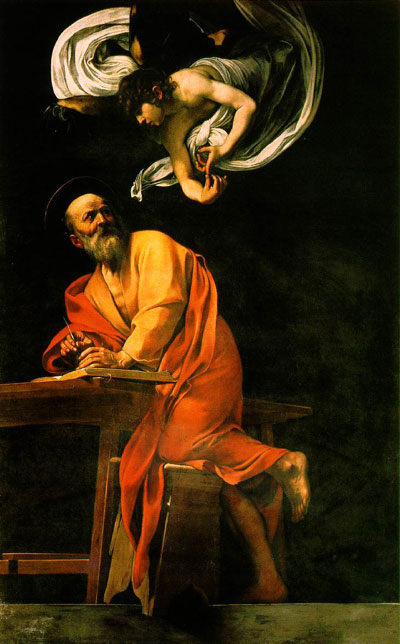 The Inspiration of Saint Matthew (1602), by Caravaggio