Latinized form of the Greek name Ἀλέξανδρος (Alexandros), which meant "defending men" from Greek ἀλέξω (alexo) meaning "to defend, help" and ἀνήρ (aner) meaning "man" (genitive ἀνδρός). In Greek mythology this was another name of the hero Paris, and it also belongs to several characters in the New Testament. However, the most famous bearer was Alexander the Great, king of Macedon. In the 4th century BC he built a huge empire out of Greece, Egypt, Persia, and parts of India. Due to his fame, and later medieval tales involving him, use of his name spread throughout Europe.The name has been used by kings of Scotland, Poland and Yugoslavia, emperors of Russia, and eight popes. Other notable bearers include English poet Alexander Pope (1688-1744), American statesman Alexander Hamilton (1755-1804), Scottish-Canadian explorer Sir Alexander MacKenzie (1764-1820), Russian poet Alexander Pushkin (1799-1837), and Alexander Graham Bell (1847-1922), the Scottish-Canadian-American inventor of the telephone. 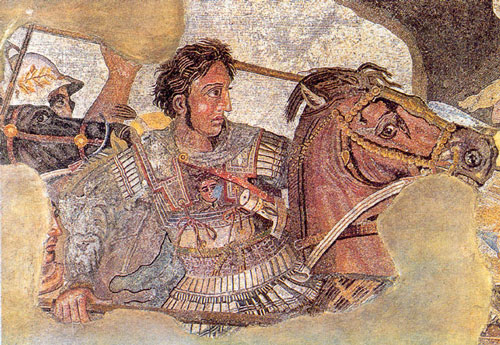 Detail of a mosaic depicting the Battle of Issus, from Pompeii