Originally a short form of Germanic names that began with the element ermen meaning "whole" or "universal". It was introduced to England by Emma of Normandy, who was the wife both of King Ethelred II (and by him the mother of Edward the Confessor) and later of King Canute. It was also borne by an 11th-century Austrian saint, who is sometimes called Hemma.After the Norman Conquest this name became common in England. It was revived in the 18th century, perhaps in part due to Matthew Prior's 1709 poem Henry and Emma [2]. It was also used by Jane Austen for the central character, the matchmaker Emma Woodhouse, in her novel Emma (1816).In the United States, it was third in rank in 1880 (behind only the ubiquitous Mary and Anna). It declined steadily over the next century, beginning another rise in the 1980s and eventually becoming the most popular name for girls in 2008. At this time it also experienced similar levels of popularity elsewhere, including the United Kingdom (where it began rising a decade earlier), Germany, France, Italy, Spain, Scandinavia and the Netherlands. 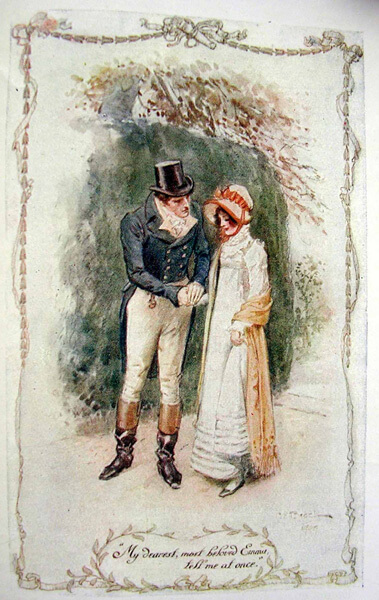 Emma Woodhouse and Mr. Knightley in an illustration from Jane Austen's Emma