Derived from Latin Margarita, which was from Greek μαργαρίτης (margarites) meaning "pearl", a word that was probably ultimately a borrowing from an Indo-Iranian language. Saint Margaret, the patron of expectant mothers, was martyred at Antioch in the 4th century. Later legends told of her escape from a dragon, with which she was often depicted in medieval art. The saint was popular during the Middle Ages, and her name has been widely used in the Christian world.As an English name it has been very popular since the Middle Ages. It was the top name for girls in England and Wales in the 1920s, 30s and 40s, but it declined in the latter half of the 20th century.Other saints by this name include a queen of Scotland and a princess of Hungary. It was also borne by Queen Margaret I of Denmark, who united Denmark, Sweden, and Norway in the 14th century. Famous literary bearers include American writer Margaret Mitchell (1900-1949), the author of Gone with the Wind, and Canadian writer Margaret Atwood (1939-). Others include American anthropologist Margaret Mead (1901-1978) and British prime minister Margaret Thatcher (1925-2013). 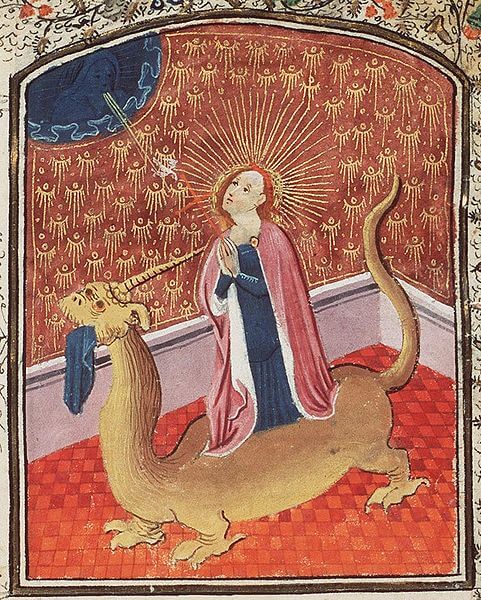 Depiction of Saint Margaret of Antioch from a manuscript (1440)